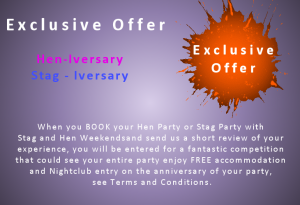 I have never been one to allow other people to organise anything for me, never mind a stag party, however, my brother and mates were normally fairly sensible, usually we play rugby on a Saturday and Gaelic on a Sunday, nothing professional, just lads having a kick about, jesus, I wondered would I still be able to play with the lads when I got married, only joking, my wife to be is a fantastic woman and life partner.

The lads told me that we would be heading to Dublin on the Friday evening, a mini bus had been organised, which was great as we did not have to worry about getting about. On the way to Dublin we had a few cans, enough to wash away the dust of a day’s work, the lads tortured me about the things they had planned for me, there was talk of being tied to the Spire in O’Connell Street, the usual things that one might dread.

When the mini bus stopped outside one of Dublin’s top hotels I thought the lads were messing, but there were not, we were staying in a top hotel, full fitness centre and spa. Oh yes, this is the way to do it, I thought. We entered the bar and one of the lads confirmed our check-in, the bar was very relaxing and food was ordered and delivered promptly. I had a 16oz tea-bone stake, chips and pepper sauce, fantastic. A couple of pints and then it was time to shower and get ready for a nite out. We went to a casino for a couple of hours, back to the hotel bar and then into a classy nite club were you could actually leave your jacket on the back of your seat without thinking it might disappear. The DJ played a few songs for our group and that was fantastic.

Next morning we were up and out early, hearty breakfast, top quality. We went clay-pigeon shooting, we had a bet on who would win and the crack was great, the spirit of competition made it so much fun, we were like kids let out for the day. We then moved a short distance away to a fantastic restaurant for lunch, we had our pictures taken and then we went go-karting, needless to say, more competition, more bets and great fun.

We returned to the hotel at 7pm, we had an evening meal and prepared once again for the nite club, we had VIP entry which meant that we felt a little bit special, at one point the DJ welcomed us back and played the theme from Body Guard as he reckoned my mates were taking very good care of me. We had a few pints, danced among ourselves, ok and a couple of the local ladies, ok they were lap-dancers, great night, unfortunately one of the lads used his IPhone to take pictures and posted them on Facebook, Yes, my wife to be is his friend on Facebook and there were some difficult questions, still the awkwardness was muted when the pictures from my fiancés hen party appeared on Facebook, stripper and strange vibrating tools from the Ann Summers party.

Thanks to stagandhenweekends.ie this was a stag party that will not be forgotten for a very long time and no doubt a stagiversary will follow in 12 months, if I am allowed out to play.

We use cookies to ensure that we give you the best experience on our website. If you continue to use this site we will assume that you are happy with it.Ok