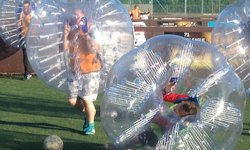 Bubble Football Carrick on Shannon: Bubble soccer is the latest craze to hit Ireland’s activities industry and you can play it now in Carrick on Shannon. Just like soccer it is a team game played on a football pitch with the object of the game to score more goals than the opposing team. That however is where the similarities end because in this game the participants are protected by a big, inflatable bubble which covers them from head to waist with only their legs free to move meaning any efforts to actually play soccer bring hilarious results. Activity takes approx. 1 hour
Minimum 10 people

We use cookies to ensure that we give you the best experience on our website. If you continue to use this site we will assume that you are happy with it.Ok